A few weeks ago on his podcast, Dan Savage blasted certain conservative policy makers for their empathic capriciousness.

He observed that many strictly anti-gay-marriage conservatives suddenly changed course when their own family members came out as gay. Most recently, we saw this when Ohio Republican, Rob Portman’s son came out; and shortly thereafter, Portman came out in support of legalizing gay marriage.

Savage asked, why does it take a personal experience to inspire a change of heart? Why, when it’s about someone else, does their ability to be empathic hide inside biblespeak or party rhetoric?

Compassion is supposed to be felt for others. So why are these policy makers blind to the pain and plight of others, until their own life experience teaches them a lesson? It’s a great question, and one that I think is important to ask ourselves today.

As a nation, we suffer from the same limitation.

This image is out of date (3 people were killed in Boston, not 2).

Yesterday, in Boston, 3 people were killed. One, a child. More than a hundred others were wounded.

It’s tragic and terrifying. It’s deeply unsettling. It makes the whole world we live in feel uncertain. And it’s what common people deal with every day in Afghanistan, in Pakistan, and anywhere else where the U.S. military sends unmanned U.S. drones. 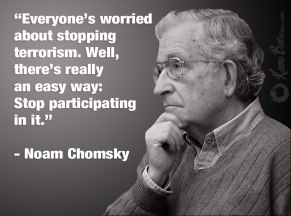 If we think about how we felt yesterday when we heard the news about the bombings at the Boston Marathon finish line, and transpose those feelings onto people just like us, on the other side of the world, dealing with the same horror – the same terror – do we feel compassion?

It can be said that even if we stopped all acts of U.S. aggression this minute, there would still be those who seek to destroy the western “way of life” through means of violence. That fact is indisputable. Religious extremists be extreme. However! It can also be said that it would help a whole goddamned lot if we role modeled some reasonable behavior.

Think about how you felt yesterday when you heard the news. Then, don’t assume someone browner, someone who lives in a far off and exotic-seeming place, feels any less devastated when it happens to them.

Hot Off the Presses